These past years I've had several short stories published, which throws me back to my first attempts at writing fiction. Thankfully those early stories remain forever disappeared, like Mafia snitches. This year I signed contracts for three short stories, all horror. The first was "Blucifer" for the StokerCon 2021 Souvenir Anthology, that I wrote about in my last post. The second story "Xipe Totec" was for Shadow Atlas: Dark Escapades of the Americas. Check out the awesome cover below. This tale draws upon Mexican fables that I heard as a kid. I also included a particularly gruesome account of human sacrifice as practiced by the Aztecs. Strange as how we file details in our memory to be repurposed later. The third story I'll explain in my next post. 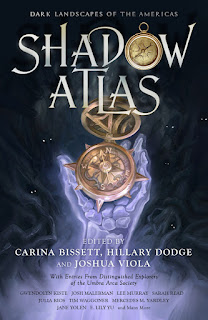 This year I had two books published, the Western novel Luther, Wyoming, and Broken Destiny, that I co-wrote with Mark Verwiel. As a WWII armchair historian, I've always wanted to write a novel about that war but never had a good story idea gel. Two such attempts are likewise buried and decomposing with my first short stories. Then as a ghostwriter, some of my clients proposed manuscripts about WWII and off I went. The other stories were about the Pacific, one of which was Forgotten Letters. However, Broken Destiny is not a novel, but a historical account of Sergeant William M. O'Loughlin, who perished when his airplane was shot down over Italy. The setting and events have links to A Canticle for Leibowitz by Walter M. Miller and Catch-22 by Joseph Heller (all three men served on B25s). Both Miller and O'Loughlin were tail gunners and bombed some of the same targets though they were posted to different units so probably never met. Heller served as a bombardier. In the book I mused that had O'Loughlin survived the war, perhaps he too might've penned a literary classic. 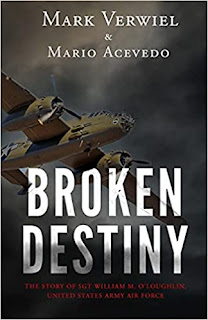